The following morning we left the mosquito infested Hotel Gap sharpish. The bike alarm had gone off at 3am and disturbed our sleep anyway. As we left there was a full scale row going on between a woman and the hotel guy though it was hard to tell at first because everyone had been talking that loudly all night.

The early start did us good however and we got to Tatvan at around 2pm. The place didn’t look great and seemed like another built up crowded town so we headed on to Edirmit. By the time the day was finished we had done 250 miles, some of it on unsealed roads which was pretty good for us.

The campsite in the guidebook did not seem to exist anymore and Antolia camping restaurant did not have any camping to speak of. Though this was a much nicer town and we were able to find another campsite just down the road for the princely sum of only 10 lira a night (5 euro). The owners kept bringing us a constant supply of tea and a few of their friends took some photos. They misunderstood Helen when she was asking where to buy clothes for Iran and gave her a blanket and some of their own clothes clearly concerned about us getting cold at night.

The following day we managed to get use of internet at a cafe and replenished the toilet roll stocks at a hotel where we paid 4 times more for breakfast than we did for the camping. Helen got some new threads in a wee shop near Van and all was good. We were unable to determine if the border crossing on the D300 nearest Van would be open or not so we headed to Dogbiscuit to cross there. 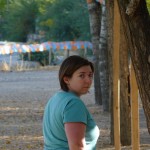 Why bother with the circuit breaker??

This entry was posted in Turkey. Bookmark the permalink.