Another restless nıghts sleep…not only due to the greyıng somewhat dodgy duvet covers. The alarm on Neıl’s bike had been set off late in the evening. After running downstairs we discovered some very suspicious looking dudes coming out of where the bikes were parked. After some thorough investigation everything seemed untouched but our strange surroundings, darkness and not so great hotel led us to move the bikes into a better lit area. None the less it was unsettling.

We were spurred on even more now to get out of the hole that was Szeged and so at 7am we were up and on the go. We reached the border with Serbia in no time and crossing through the Hungarian side proved simple. Unfortunately the same could not be said for the Serbian side.

Having made the decision to come to Serbia due to the prospect of better roads, we knew that there would be 3rd party insurance to pay at the border. However we did not realise for how much..160 euro later and the mood was sombre to say the least. We decided after some mulling over to put it behind us and use the opportunity to cover a lot of miles so as to almost justify the money!

Still smarting from the insurance we pushed on on relatively good roads only to find that they were tolled as well! We were stringing together euro and Dinar to cover the cost. Serbia didn’t look so good after all…

To add insult to injury Serbian driving left a lot to be desired. Apparently one could overtake at any opportunity (even if there wasn’t one) and if something came the other way…. well you just push the vehicle you’re overtaking into the hard shoulder of course!

The first half of Serbia was flat nothingness as far as you could see and then Belgrade just appeared out of nowhere! As we approached Belgrade surrounded by an assortment of lorries, ladas and more modern cars we were tailed by an old 1970’s Mercedes. Fearing for some upcoming atrocious driving manoeuvre I kept my speed steady and was pleasantly surprised when the vehicle overtook to come alongside me. Inside were an elderly couple who were smiling, waving and taking pictures of us! It was a heart-warming moment after a troublesome morning.

Belgrade had the modern skyline of any other city centred around the Danube river. There was little evidence to see of it’s troubled past.

Thankfully the southern half of Serbia did a lot to lift our spirits. The motorway took us over a beautiful mountainous region in stark contrast to the mornings scenery.

After 300 miles we felt better about the money we had spent and after asking some helpful locals we found a lovely hotel in the hills on the road to Sofia. For 40 euro we had a typical Serbian grill and salad, beers and breakfast with some great Serbian hospitality. 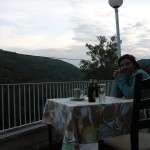 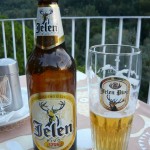 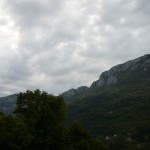 This entry was posted in Europe. Bookmark the permalink.